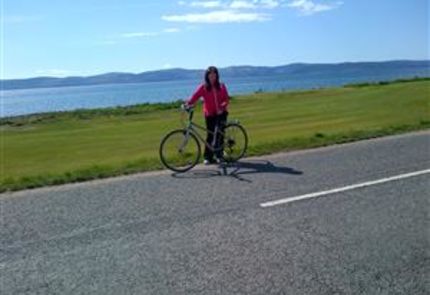 Many of you will know that living with PBC does not come without its challenges. Having being diagnosed for nearly twenty years (and suffering the symptoms even longer), as you can imagine, I have tried all sorts to ease the physical and emotion burden of living with this disease. Not to bore you with all of my madcap plans, I thought I would share with you some of my successes.

Tiredness and fatigue have always been major issues for me and I coped by having an afternoon or early evening nap. Those naps became longer and before I knew it I was doing less and less. By the time I was forty, I felt old and past it – oh how wrong I was!

Listening to a Canadian PBC expert made me change my approach to my condition. He stated that exercise and movement were good and healthy for everybody, BUT, especially for those with chronic conditions such as PBC. I thought he was nuts but I was prepared to give it a go.

Over a very long period of time, I became fitter and stronger by trying all sorts of exercise. Dancing to my favourite sixties music at home (oh, the good old days!). I used to swim as a youngster so I went back to swimming, I began with half a length which was exhausting but now I can do fifty at a slow pace.   I went out with one of my friends walking her dog, it was good company too, it is hard to beat a good old chin wag with a pal.

Not only did I become fitter and stronger, emotionally I was able to cope better, not just living with PBC but with the everyday trials of work, children and looking after a home. The big challenge was still to come, I loved cycling as a child, could I ever get back on a bike again? After a huge amount of encouragement from my husband Steve and sons, I gave it a whirl and I loved it just as much as I did all those years ago. From time to time, we take the bikes in the car down to the Scottish borders and have a wee cycle on the quiet roads, stop for a scone and tea and come back. Perfect.

I now have my own dog Holly and so now I have to walk her tired or not. Sometimes she has a ten minute walk, sometimes twenty or thirty, at least I am moving.

All of this took years to build, walking began with going up my house stairs and back repeatedly, walking from lamppost to lamppost and extending the distance when I could. Sure, sometimes I would just be too tired to try but I persisted.

Sharing this with you would be so worthwhile if it gave you the confidence just to try a little something. Oh and there is the occasional perk. My husband Steve and I were cycling in East Lothian to the Museum of Flight. When we arrived we were asked if we were cyclists (I was tempted to say no, I always walk around with a helmet under my arm) anyhow, they gave us a £4 discount on the entry fee. Not bad for a couple of old duffers like us!