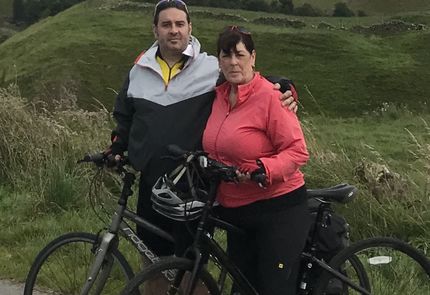 This photograph was taken at the beginning of the week of International PBC Day.

Given the huge task that Robert and three friends of the PBC Foundation have set for themselves, as his mum, I was sure he would benefit from taking time out of his busy schedule to do some training.

I have never been in a kayak or have been a hill walker but cycling? Yes that's my thing. We set off from Eddleston in the Scottish Borders and cycled a very hilly and tiring twenty miles.

Robert cycled far better than I thought he would, particularly on the steep hills so I was chuffed to bits for him.

Like most people of my age, everywhere I went as a youngster was in my bike. My dad would often take me on trips to see his friends and we did so on our bikes, him cycling behind me watching out for me. One day, around 1966 we were on this wide road and he shouted "Collette, be careful, there is a car coming"! Think of that - a car!! That road is now one of the busiest roads for traffic in Edinburgh!!   Changed days.

I continued cycling after his death (when I was just eleven) and would go out with my younger son Chris. Robert by far preferred to be playing football. It was during my thirties that cycling became more and more difficult. Looking after a home, children, holding down a job and becoming increasingly tired caused me to struggle hugely.

The cycling eventually stopped at the age of thirty seven after being diagnosed with PBC. The fatigue, lethargy, tiredness, feeling of being drugged, call it what you will, simply took over my life.

In those days (circa 1994) the advice given to PBC sufferers was to do what you can and rest as much as you can. These instructions I followed religiously, having afternoon naps trying to conserve my energy. The result of this behaviour and way of life was to become more and more tired and less I was achieving physically.  My emotional state also deteriorated.

Today, at the age of 61, I comfortably walk three or four miles most days (with my wee dog Holly Jones). I try and cycle every other weekend and I also have twenty minutes peddling my bike on a roller most days.

You would be right to ask where my energy comes from! Simple. I bought into 'Movement as Medicine'. On hearing of this concept from the PBC specialists in Newcastle I was inspired to give it a go. They explained to me that some patients waiting transplant were becoming too weak for surgery whilst waiting for an organ donor. The remedy was to send give the patients an exercise regime to build their strength and it worked!

My thinking was if it worked for PBC sufferers who were far more ill than me then I must be able to benefit in some way.

My program started slowly with just ten minute walks which I increased most weeks. I found the courage to buy a bike and started cycling again. Very very slowly of course but I began to enjoy it every bit as much as I did as a child.

My strength and confidence just grew and grew.

Yes, I'm still tired, but, I achieve more, I am much fitter than I ever was and my emotional and psychological health has improved vastly.

The benefits of Movement as Medicine are many fold and I am so glad (as are my family) that I had the courage to give it a try.

Think about it yourself this weekend leading up to  International PBC Day   Think about something you would enjoy for you - perhaps with a child, grand child, neighbour, friend, pet or fellow PBC sufferer. Movement as Medicine embracing positive thoughts.

Let me know how you get on - I would love to hear from you or meet with you for a wee walk in Holyrood Park at noon.