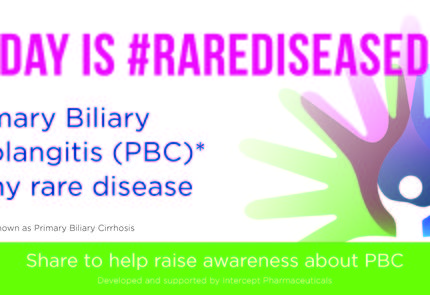 Although most people may associate 29th February as being that rare day when women traditionally propose marriage to men, the date this year marks something far more meaningful for many of us, though it’s equally as ‘rare’. It marks International Rare Disease Day. On this day, people living with or affected by a rare disease will come together in solidarity to raise awareness of rare diseases. The theme in 2016 is the ‘Patient Voice’, championed in particular by an organisation called EURORDIS whose mission is to be the voice of an estimated 30 million people living with a rare disease in Europe. The emphasis throughout will be on the crucial role that patients play in voicing their needs and in instigating change to be heard.

The PBC Foundation, a charity actively supporting people with the rare disease Primary Biliary Cholangitis, is also an advocate of the ‘patient voice’ principle both in amplifying awareness of the illness and in bringing about much-needed change. This approach has been developed over the past two decades in response to a need amongst patients and medical professionals for a clearer understanding of the disease. Before the Foundation began its crusade the problems for patients suffering from PBC were considerable, beginning with a correct diagnosis which was not always forthcoming and a prescribed medication that was sometimes ineffective. PBC in fact is an auto-immune condition of the bile ducts in the liver, with no known cause or cure. Its symptoms include extreme tiredness, chronic itching, joint pain, dry eyes and mouth and in the most severe cases, can lead to the need for a liver transplant. It is a complex ailment making significant demands of the medical staff involved.

Not dissimilar to many other charities supporting people with less-well known conditions, the PBC Foundation was set up 20 years ago out of necessity – and frustration.  Diagnosed with the illness myself and told I had between 5-7 years to live, I could find no information produced by the NHS or anybody else to explain which I had or was facing, and there were certainly no support groups. At a time when using a phone and directory was still the main form of gathering information, hours were spent at the kitchen table phoning up hospitals and doctors around the UK, trying to find somebody who had some specialist knowledge of the illness. I concluded that if I was having trouble, then no doubt the 1 in 400 women in the UK estimated to have the same illness must be facing similar barriers.

Our Edinburgh-based support group developed quickly as we began to advertise our services. With the help of key people in the medical world and with funds accumulated from a variety of sources, we began to produce information for both patients and GP’s. Twenty years on and the Foundation is proud to support over 10,000 service users in 71 countries. We are the patient voice of PBC to the medical fraternity as well as a number of pharmaceutical companies who consult us on treatments and approaches.

A demonstration of the power of our patient voice is the change we were instrumental in bringing about to the PBC name. Formerly, the ‘C’ stood for ‘Cirrhosis’ which, in some cases is not applicable and for many can lead to misconceptions.  Following a consultation with our service users mirrored by a consultation amongst the clinicians at EASL (European Association for Study of the Liver) the term “cholangitis” which refers to inflammation of the bile ducts was successfully selected as a replacement and adopted last year.

As PBC patients, our voice has been, and continues to be, heard. Through our collective experience and views, we are ensuring that we are as much a part of the solution as the problem. Having a rare disease is not a cause for celebration, but the aims of International Rare Disease day most certainly are.

Check out an opinion piece on living with a rare disease from our CEO on #RareDiseaseDay https://t.co/HLo0d6xT4i Pls RT