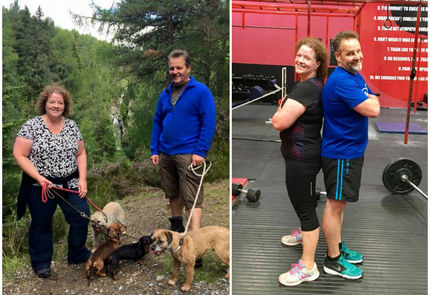 Our aim, almost all of the time but especially on PBC Day, is to promote Movement as Medicine.

The idea that very modest levels of physical activity (30min cumulative per day) can have a marked impact upon your physical and mental wellbeing is a simple but important one.

Well today we bring you a story of someone who took that concept and ran with it, probably quite literally.

If you look at December 2015 issue (#72) of the Bear Facts, you'll see a feature on PBC Day and all those people who took up the gauntlet of our challenge to do a walk on PBC Day. One of those people was Gillian.

Well in the spring of this year we got an interesting email from Gillian;

My husband and I are swapping exercise regimes for 1 week to promote Movement as Medicine - so for Willie its a week of Boogie Bounce and Zumba, and the following week i will attend his gym.

Shortly afterwards we got a follow up email to say that not only had they completed the challenge, with Gillian tearing it up at Raw Anatomy Fitness Centre and Willie getting right into the swing of things at Boogie Bounce and Zumba, but they had totally smashed their fundraising target of £250, raising almost three times the amount.

Yet the amount they raised isn't the key outcome from this. What we didn't know, because Gill is probably too modest to mention it, is that she totally transformed her wellbeing as a result of adopting the movement as medicine mantra a few years ago. Her daughter Hannah dropped us a line;

Mum has worked so so hard over the past year and has lost over 6 stone, so her going to do the exercise my dad does was a massive achievement for her as she never would have done it before and it has dramatically changed the amount of fat surrounding her liver which she was advised of at her recent hospital appointment. We are all so proud of her.

Deservedly so we say. What Gillian has proved is that the first steps to changing your health can be as simple as donning the walking boots and taking the dog for a stroll. In doing so, your levels of fitness and motivation will naturally increase until you find yourself, eighteen months down the line, six stone lighter.

When we asked Gill to reflect on the process of the last year and a half and her perspectives now she said;

I was motivated to join in with the movement as medicine through your Facebook page - our family enjoy being outdoors anyway, so it seemed like a good idea to combine the two and have a walk on PBC day.  I have always had a problem with my weight, and last year decided it was time to do something about it ...  I have managed to lose over 6 stone since last April, and feel great, it is still a journey I have to complete, but feel so much better.

I would say exercise has made me feel, and look better, it has lightened my mood, given me new friends and encouraged me to do more, so I have signed up for a 10K race in Aviemore in October.  I have gone from a person who always advised anyone who would listen that I was not 'a runner' to doing the couch to 5k plan, and thoroughly enjoying it.

The key for me has always been to enjoy what I am doing, exercise for me is such a chore if its not enjoyable, and the things I have chosen to do allow me to do things at my own pace, whether it be Zumba, running, walking or cycling.  I was told do what I could, and I have, and as I lost weight and felt better, I increased what I was doing and still love it - the dogs love it because they get more exercise, my husband and grand daughter love it because they get to spend better time with me doing fun things.

Movement as medicine for me is not about quantity or doing heroic things, its about doing what you can when you can in order to feel better.

I have had great results and was initially inspired by the PBC campaign and would encourage anyone who is able to do a little more, and see if just maybe little improvements can be made and sustained.

So this year could be your chance to follow in Gill's footsteps (into the Zumba class even). PBC Day 2017 is on the 10th September and the theme is "A Walk In The Park". We want people to gather their friends and family in a walk in a local park or nature reserve etc and do whatever level of walk you feel up to. Even better is to, as Gill did, use the opportunity to raise funds to support others affected by PBC. You can set up a PBC Day fundraising page at the following link: https://www.justgiving.com/campaigns/charity/pbc/pbcday2017