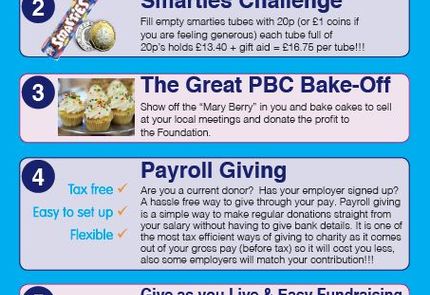 There are many ways to raise money for the Foundation.  Here are some examples of what other people have done for us and if you are looking for a few ideas, why not download this list for a few suggestions: List of fundraising ideas.pdf

Our Nottinghamshire volunteer Wendy Wheat will be undertaking some serious walking all in the name of PBC.

Wendy will be walking 21.1 km at Tissington Trail, Peak District on the 21st April also starting on the 30th April I will be walking 100 km from Sarria to Santiago, Spain in 8 days to raise funds for the PBC Foundation.

In her own words Wendy explains "I was diagnosed with PBC over 5 years ago, I had not heard of PBC and there was no one to turn to.  My Consultant told me to contact the PBC Foundation, they have been a lifeline, not sure where I would be without them.  I am now a volunteer for the Foundation in Nottinghamshire and run a support group.  I am lucky to have such a wonderful and inspiring group who have become my extended family. My group members and the Foundation have given me so much strength I want to give something back and help raise funds so the Foundation can continue to support their members".

To find out more and to support and donate to Wendy's challenge, please go to: